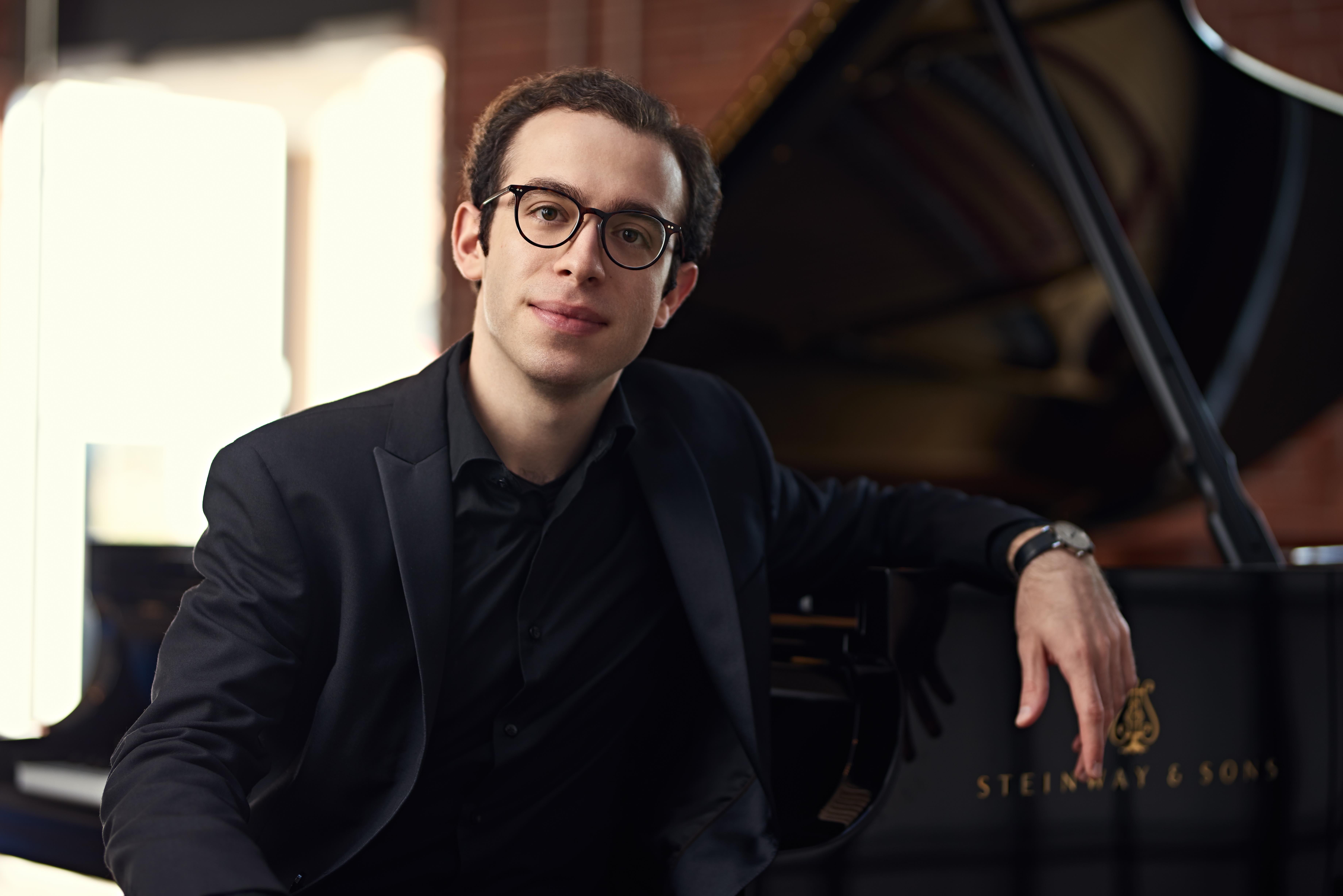 Life and Death are absolutes often explored in the canon of musical repertoire. The piano literature alonefeatures meditations and musings on the nature of man, existence and mortality in countless ways. Themusic need not a programmatic title to portray these human conditions and questions. The nature of musicitself, intangible and inspirational, is linked to the spiritual dimension in that it is not limited to language orboundaries. It touches the ephemeral and the eternal in ways no other art form can. And in between, whatis Man to do, but eat, drink, and be merry? That being said, a dance or two or three might also help.

Nicolas Namoradze offers a recital that reflects this panorama of perspective of life and death. Fromcreation to the everlasting known as “ewigkeit,” he begins in Germany, with Bach, whose genius achieved anastounding output that has never been replicated. The Well-Tempered Clavier is considered by most to bethe Bible of Baroque piano. His French Suites were no less satisfying, but perhaps more indicative of beingmore classical in style, and yet, cosmopolitan would be the more appropriate word for its innovative use ofvarious European styles. The Suites are not at all French, but in fact were given this locality after the deathof Bach. Nevertheless, French Suites they remain, perhaps more for the fact that Bach composed them forhis 2nd wife, Anna Magdalena, for his children and students, for a private circle. They were therefore morebourgeois than aristocratic, foreshadowing the universality of democratic reforms the French introduced intheir revolutionary fervor. The French Suites were in essence music for the purpose of doing the very thingthat defines good living: Learning.

What is indeed French in this Suite in D minor BWV 812 is the use of the French “Courante,” somewhatfashionable in the 18th century for its slow character allowing ornamentation and harmonizations. Bachkeeps strictly to the standard order of dances in the Suite: allemande, courante, sarabande, two minuets anda gigue. The music demands technical dexterity, tonal definition, and a stylistic understanding to achieve ahigh performance level. What better way to shout out: “I am alive” then to prove it with a dance.

Bach was prolific. His creative output was no less than 1000 works, all of which remain to this day amongthe highest achievements of Mankind. One might argue he carved an indelible path for others to follow.Nicolas Namoradze is one who embraces that challenge, not only as a masterful pianist, but as a composer.Already he has been hailed by critics and audiences for his “quasi-mystical” musical compositions. Hecarries on Bach’s tradition of counterpoint and mirror imaging to the extreme, but by adding macroharmonies, using a small series of notes over spans of musical time, Namoradze increases the intensity andsuspension of the soundscape. The result is the musical equivalent of an Escher drawing, articulate,unlimited, indefinite, innovative and immensely spiritual.

Bach: Contrapuncti VI & VII from The Art of Fugue BWV 1080

Bach himself wrote of his Art of the Fugue: “The governing idea of the work was an exploration in depth ofthe contrapuntal possibilities inherent in a single musical subject.”
That subject is found in canon and fugue with variations throughout.

Unlike the simple fugues used in the contrapuncti 1-5, by the 6th and later contrpuncti, Bach evolved andadapted, devising “Stretto Fugues” or Counter-fugues, in which the subject is used simultaneously in regular,inverted, augmented, and diminished forms. It might be noted the connection with the French suite in thatthe Contrapuncti VI is composed in the style à la Française; that is, highlighting and embellishing dotted rhythms.

How is this relevant? Life is a four-phased flow from unconscious incompetency, through consciousincompetency to conscious competency to finally the bliss of unconscious competency. The fugues showthe complexity and maturity that comes from the span of a lifetime. The challenge of the VI and VIIcontrapuncti is the same challenge of being an adult: surviving the storm. Life is not a utopia. It takes hardwork and perseverance. The dissonances these Counter-fugues create display the drama of an active lifedriven by an existential purpose. The questions of life and death are ignored while engaged in theinevitability of note by note, breath by breath.

All that work and no play makes Johann a dull boy. What now is needed is a dream. Frédéric (Fryderyk)Chopin, ever the painter of musical prose, takes us into a well deserved repose, reminding us that we spendover 30 % of our lives in bed falling asleep and dreaming. Any reflection on the philosophical question of lifeand death must include that portion of our lives. If memories define who we are and how we lived, thepurpose of dreams is they help us collect important souvenirs. Death may be the ultimate slumber, but lifeneeds sleep for its sustenance.

Chopin’s Berceuse is generally regarded by most critics and pianists as a lyrical masterpiece, in whichChopin’s compositional artistry is fully manifest. A theme and variations in miniature, The ornamentaldevices and complex figures played in the lyrical right hand create unusual and innovative colors and tonal-harmonic effects, always in a light piano delicacy, at times predating musical impressionism. As a workwritten late in Chopin’s life, and inspired by the young daughter of a friend, it reminds us of the final phase oflife: By the wisdom of old age, it is no wonder that seniors and toddlers are so satisfied to be together. Theyshare that quality of unconscious living. And it is in the unconscious mind where dreams live.

“And all good things come to an end” says the proverb. From the lullaby of dreams and childhood, weconfront our maker and wonder: Is there the eternity promised during life?

Bach, ever the Lutheran, gives us his answer in a musical interrogation of the spirit. The simplicity is themagic. Like the end itself. All the unanswered questions and conflicts are suddenly resolved, the melodythat rises above the arpeggiated left hand is the light at the end of the tunnel, beckoning us to come, calmly,sweetly, gently into that good night.

Bach’s famous cantata inspired many a composer to transcribe it. From Mendelssohn to Schumann toBrahms. But it was Busoni’s version that gave a two hand standard piano version that is most oftenperformed. It is atypical Bach, less contrapuntal, less complicated, less fugal and thereby it is the lesson of along life itself: That less is more.

In the beginning, Bach gave us the epiphany of the dance. To end this fascinating and virtuosic recitalprogram, Liszt turns the dance on its head. The danse macabre, or Totentanz, is a study on the Gregorianplainchant Dies Irae, that Latin lesson of God’s wrath. If Bach called upon his Lord with humility, Liszt, in trueBach-ian fashion with a theme and variations that include canonic and fugal sections, gives him the finger ina Bacchanalia of hedonistic proportions. In a true Romantic spirit, Liszt brings the darkness of Death into thedebate. The innovative percussive piano part inverses the idea of knocking on Heaven's door to insteadimply the Gates of Hell. The German critic Richard Pohl described the Totentanz in a very theatrical way:"Every variation discloses some new character—the earnest man, the flighty youth, the scornful doubter, theprayerful monk, the daring soldier, the tender maiden, the playful child.” Yet none are immune to judgement.

In addition to these, the 1st version of the Totentanz included an earlier work based on a setting of Psalm130, De profundis near the end. Given the psalms’s message of mercy and redemption, the presence of Deprofundis seemed to offer solace at the end of Totentanz. It may therefore be posited that finally, after thismusical and philosophical and spiritual musical dialogue, the answer to the question of life and death is aword and the word is good: Hope.