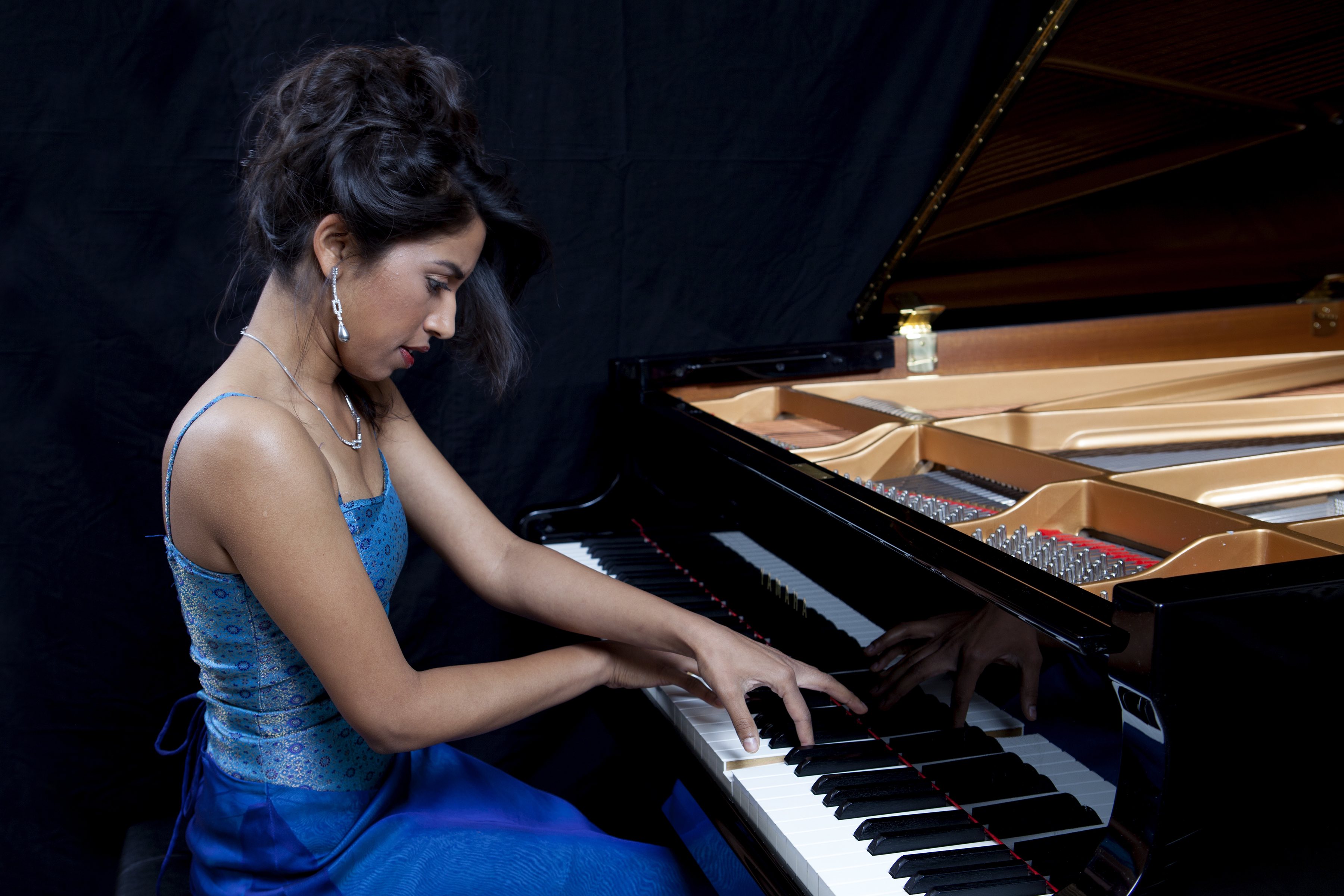 As early as thirteen years old, Sergei Prokofiev was admitted to the St. PetersburgConservatory to study piano with Alexander Winkler, and studied composition and harmony classes with Anatoly Lyadov, whom Prokofiev called “extremely dull.”During these early years of student life and composing, Prokofiev completed works for his own performance, such as Piano Sonata No. 1, Piano Sonata No. 2 and PianoConcerto No. 1, which he played for his graduation examination.

Prokofiev wrote later of his Piano Sonata:
“I discarded the second and third movements, then reworked the first and made it intoSonata No. 1, Opus 1. But alongside my serious numbered works, this sonata seemed too youthful, somehow. It turned out that, although it was a solid opus when I was fifteen, it could not hold its own among my more mature compositions....With me it was different: the Sonata No. 1, a naïve and simple little piece, marked the end of my early period.”

“Naïve and simple” the First Sonata may well have seemed to Prokofiev when he judged it against his later masterpieces, but it is a remarkable accomplishment for a fifteen-year old —confident even if conventional in form, absolutely virtuosic in technique, ideal for the piano, and inclusive of the most contemporary harmonic and compositional techniques of his time. Prokofiev dedicated much of his solo piano works to the tradition of the sonata, a form that became as essential to a piano composer’s practice as the traditional theme and variations. Both genre techniques were vital to establishing a composer’s profile as we shall hear with Brahms in the conclusion of this program.

Observe the octaves played as melodic chords from the start, flexible in phrasing yet precise in rhythm articulation. The opening theme is passionate, the transition is hesitant, but then quickly accumulates energy leading to the second theme, a romantic, lyrical, rising melody reminiscent of Rachmaninov. The ending octaves scream for attention echoing Rachmaninov yet again. Rachmaninov was a towering influence, perhaps more so than Scriabin, Schumann, Brahms or Chopin. It is no small wonder then that Rachmaninov is prominently featured in this recital program.But where Rachmaninov might be considered more a poet of the piano, Prokofiev was of a new generation determined to turn that poetry into a wicked prose. AsDiaghilev once said: “While Stravinsky is much more tied to the Gods, Prokofiev is friendly with the Devils.”

Lyadov was anything but dull, but he did struggle with procrastination and in difference throughout his life. In 1867, he entered the St. Petersburg Conservatory; however, eight years later, he was expelled after repeated complaints of indolence.Another famous example of this laziness was Lyadov's rejection of Diaghilev’s proposal to compose music for the ballet Firebird. Diaghilev then engaged a youngIgor Stravinsky, in what was to prove the start of what we all now know was a highly successful and scandalous collaboration.

Lyadov was a sensitive and emotional man. He preferred solitude and avoided publicity He loved the Russian skazkii (fairy tales) as a means to escape from reality and as a great source of inspiration. Although Lyadov’s compositional style is similar to his Russian contemporaries, particularly Rimsky Korsakov, he had a unique voice.He employed lighter and smaller parameters and was more subtle and restrained.

The Barcarolle, Op. 44, of 1898 is a perfect example of this style, with flourishing arpeggios, ornamented lyricism and chromatic modulations. There is an intimacy tothe work that suggests the introverted aspects of Lyadov’s character. The theme is not to be sung, but rather hummed as if to oneself.

And what could be more intimate than a music box to lull one to sleep. The MusicBox, op. 32, “une tabatière à musique” is a fragile piece of porcelain, like a Fabergé egg that when opened plays a gem of music, as brilliant as a diamond and as delicate as a ballerina balancing on her toes. The polyrhythms of duplets against triplets highlight the fantasy of the ballet. The romanticism is undeniable, the innocence is unmistakable and the preciousness of this piece is unforgettable.

After such beautiful bon-bons, we come to the heart of Slavic eclecticism and folklore, of virtuosity and hearty ingenuity. Modest Mussorgsky was a titan of theRussian soul, not only because of his infamous insobriety, but for his original use of harmonies, themes, and rhythms from folklore. And leave it to his alter egoRachmaninov to transcribe the music of the Sorichintsy Fair into an astonishing short display of pianistic genius. Heavy chords mixed with glissandi and changes of tempo and harmony suggest the men dancing in the fair, squatting and kicking, with the ladies being tossed in the air and spun around. This GOPAK dance (actually pronounced with a G sound), of Ukrainian cossack origin, is supposed to evoke a sense of improvisation, so the pace of the music changes from segment to segment, allowing dancers to distinguish themselves, in the same way our pianist must cross her left hand over the right in a flourish, until this encore piece ends in a final trifle of a smile.

Rachmaninov understood the genius of Mussorgsky, but he was too noble and elegant as a composer and person to stray too far to the back of the bar. He preferred perfumes and poetry, flowers and fancy dress. Rachmaninov was much closer to the ideas and ideals of Chopin. His Lilacs, Op. 21 No. 5 is, like the Lyadov, immersed in Russian romanticism, however more demanding in pianism, that only hands like his could master at the time. The notes waffle in the wind like lilac petals, arpeggios ascending and descending like butterflies and bumblebees seeking their happiness.

The piece is inspired by a poem by Ekaterina Andreyena Beketova:

In the morning, at daybreak,
over the dewy grass,
I will go to breathe the crisp dawn; and in the fragrant shade,
where the lilac crowds,
I will go to seek my happiness...

In life, only one happiness
it was fated for me to discover,
and that happiness lives in the lilacs; in the green boughs,
in the fragrant bunches,
my poor happiness blossoms...

Our young pianist ventures further into Rachmaninov’s musical garden. By 19 years of age, Rachmaninov had won accolades for his Prelude in C sharp minor. But, by1900, after the failures of his early works, particularly his Symphony No. 1 and PianoConcerto No. 1, his own inner demons and depression threatened his future output.Thanks to hypnotherapy administered by his friend, Dr. Nikolai Dahl, Rachmaninov composed in 1901 his Piano Concerto No. 2, arguably his most enduring and popular work, resurrecting his career. The Prelude Op. 23, No. 5 in G minor, was composed in the same year, demonstrating this renewed confidence. This prelude, one of the 10of Op. 23, is a march of musical militarism, of power and self determination.Controlled to the point of obsession yet beneath there is a typical Rachmaninov chromatic lyricism awaiting. The 2nd theme in exotic octaves is a beautiful souvenir of nostalgia and romance, as if love is waiting at home, while the march carries on.We are reminded of Emil Gilels’ famous performance of the Prelude for the Soviet troops during World War 2: "Gilels is playing at the front, to remind us what the waris worth fighting for: Immortal music!” Each time this monument of piano music is played, immortality is invested anew.

The Prelude Op. 23 in D major, No. 4, of the same series of Preludes, is the stark contrast to the alla marcia of the No. 5. We are lulled into a dream by the lullaby of a graceful melody of intention and intimacy. A theme that becomes as clear as theNorth Star, guiding both pianist and public on a journey to the Self. As Rachmaninov wrote about his themes:

“A short piece can be a sustainable masterpiece, quite the same as a great composition. [...] When I write a small piece for piano, I am in the hands of my thematic inspiration that must be realized in the short and straightforward.”

Here, Chopin’s preludes are recalled as an inspiration, with a perpetually moving lefthand accompanying a melody that speaks of an inner voice, perhaps the very one left behind on the therapist’s couch. Why? Where? When? Who? Such questions are posed in this theme and variations. At times we feel the sadness in the sustained lyricism and chromatic tensions. When after the climax and the third variation, we finally resolve to acceptance and healing, returning to the calm D major from which we came.

Brahms: Variations and Fugue on a Theme by Händel, Op. 24 is the final work and the culmination of both the program and a continuation of the concept of the me and variations. Theme and variations is among the earliest forms of composition, traced to the 15th century, but it was during the Baroque and Classical era when the genre became as central to the compositional process as did the sonata form. The theme and variations continued through the romantic and modern epochs and, even today, remains vital to composers. Why? The variations give the composer the chance to articulate his (or her) own voice in contrast to the familiar. Rachmaninov also added the theme and variations method to his piano opus with his Rhapsody on aTheme of Paganini.

The theme can be original or quoted by another composer out of respect and an intention to be associated with the same grandeur as the composer being cited.Variations can be melodic, harmonic, rhythmic and modal. Brahms is no stranger to quoting others. His Haydn Variations are core repertoire for orchestras, and the finale of his 4th symphony has no less than 32 passacaglia variations. Here, he quotes Händel’s Harpsichord Suite No. 1 in B flat Major, itself known as the HandelVariations.

Brahms makes it his own throughout all 25 variations until the final fugue deliveringa tour de force that has few rivals in the piano literature. Despite the young age of28, Brahms was already in command of both the instrument and the compositionalprocess. Written in 1861, it is dedicated to Clara Schumann, among the many work she composed for her, and who was to remain Brahms’ muse and confidant for theremainder of his life. Brahms's variations expressed and developed the character of the theme. Because the theme for the Handel variations originated in the Baroqueera, Brahms included such forms as a siciliana, a musette, a canon and a fugue. It is indeed a showpiece for both the composer and the pianist. He adored the work and knew the future it had. As he wrote to his publisher Breitkopf & Hârtl: "I am unwilling, at the first hurdle, to give up my desire to see this, my favorite work, published by you...I consider this work to be much better than my earlier ones; I think it is also much better adapted to the demands of performance and will therefore be easier to market ...”

Marketed it was and we are the better off for it, hearing it now played 160 years later.When Brahms played these Handel Variations for Richard Wagner, it is said Wagnerremarked: "One sees what still may be done in the old forms when someone comes along who knows how to use them.” We are grateful Pallavi Mahidhara has come along and her knowing how to play Brahms and all these other uncovered gems fromRussia in what is a most remarkable and delightful program.